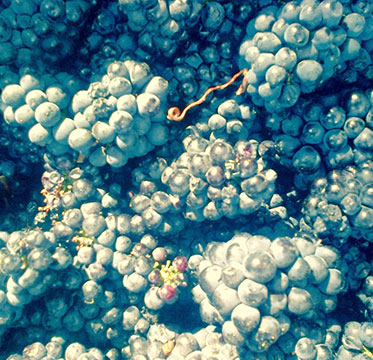 2016 was another unusually early and short harvest – almost exactly the same timing as 2015. We were nearly 2 weeks early and finished harvest in just over 4 weeks versus our usual 7 weeks. But as is wonderfully the case with nature, the character of the 2016’s is surprisingly different to the 2015’s. For the winelands in general, the story was of excessive heat and extreme dryness. But this was not the case for our appellation, the Hemel-en-Aarde Valley. Close proximity to the cool South Atlantic kept the maximum temperatures in line and we also benefitted from timely rain from the southeast, which seldom reaches the warmer inland areas. January was quite a bit warmer than our long-term average (the same as for 1998 and 2011) but it was not drier than average. And the crucial month of February was wetter than average without being warmer – as was March. Our main dam was almost full at the end of harvest. A relatively warm December, followed by a hot January was probably the main factor in making 2016 an early year.

Yields were normal for Pinot noir and Chardonnay (low in any event at 3 tons/hectare and under), but lower for Sauvignon blanc and much lower for Pinotage. Budbreak was a touch less even than in 2015, particularly for Chardonnay. Ripeness within vineyard blocks was a little more varied than usual for Chardonnay. We are very happy with the style and character of the Pinot noir, but at this early stage it looks as if the whites may have the edge on the reds.

if the 2015’s are full, ripe, generous and sumptuous with pure, lifted sweet fruit, the 2016’s in the barrel are tighter, leaner and more structured, perhaps even more “classic”. Unlike the 2015’s, the 2016’s achieved phenolic ripeness at lower alcohols and counterintuitively, the acids were a little lower and the pH’s a little higher. In our second year of organic practices, we have seen the same benefits we experienced in the 2015’s – clean, healthy fermentations and enhanced fruit purity and precision.

High humidity did create some anxiety – less over downey mildew – more over oidium – so it will be remembered as a more challenging year than 2015, but the resulting wines for the classicists and purists will perhaps be seen as more typical of our style.